Next to having inspired the likes of Oprah Winfrey, Whitney Houston, Janet Jackson and Lupita Nyong’o – Alek Wek is most famously known for changing the world’s perspective on the diversity of beauty. With being the first African model to flaunt the cover of Elle Magazine, she has opened a door that seemed to be very stuck, for many different ethnicities. She gave us a role model to show that we are all beautiful and unique.
She made a great comeback at Balenciaga this year, and quickly her face was the most wanted in Fashion World again. I had the pleasure of dressing her during a cover shoot for L’Officiel Indonesia in Brooklyn last year, and here is my personal experience.

I remember that it was a very cold day and we had to leave early since we had to go to a studio somewhere in Brooklyn. Carrying Connie’s broken suitcases into the Uber, I wondered why Connie seemed a little nervous. She had previously told me that Alek Wek was a great fashion icon, but in general all the shoots felt like they were filled with the newest faces from the runway. So a little unprepared, I just went with it.
We entered a cool studio and these never failed to amaze me in Brooklyn. Behind what seemed to be an empty building left  behind to turn into a ruin – there were these fabulous studio 54 treasures hidden inside. We met the team, and I started my routine of unpacking, hanging the clothes and steaming them thoroughly. Since we were still waiting on some very important looks from Marni, Louis Vuitton and Alexander McQueen to be delivered to the studio I was feeling pretty tensed. 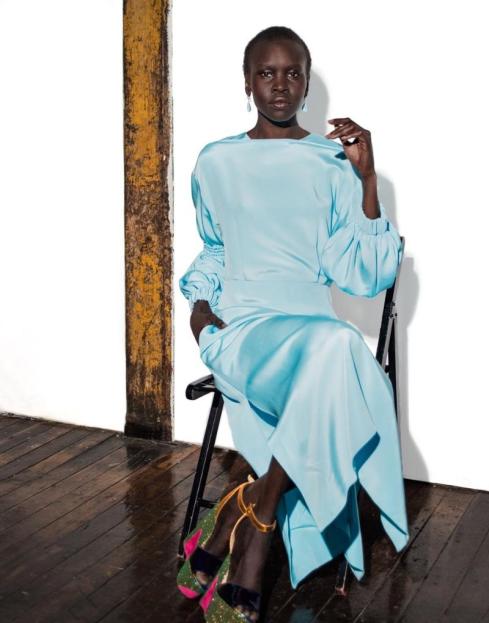 When Alek came in it was like the sun had just started shining! Honestly, she is the sweetest, most relaxed and down to earth model I have met in my life. I remember she was very interested in my life, which was really new to me since as a fashion assistant you always clearly knew your place. This would be a good time to watch The Devil Wears Prada, in case you haven’t yet. But she would ask me about where I came from, since she knew I wasn’t American – and thought I was Italian. She complimented me on my leopard suit that I had made before coming to New York. I felt acknowledged and somehow a little at home being surrounded by this familiar energy of down-to-earthness.

At this point in my internship, Connie was without her assistants and I had just taken their place – jumping from the position of an intern to assistant. The pressure was higher than before and so more responsibilities came along with it. With one look I had to put on these Gianvito Rossi boots which were laced up until over the knee. The exact same as Ms. Taylor Swift is wearing in her newest video Look What You Just Made Me Do?! I swear to God; I know where she got the inspiration to that song title from...
I don’t know why but it just didn’t work – I couldn’t get her into those boots. Connie was watching me and getting slightly annoyed by the time it was taking and so it only got worse. As a fashion assistant you are literally on your knees dressing models while the rest of the room is waiting impatiently for you to finish, and this is not very profitable for your self esteem.

Alek laughed and helped me when she saw that I started turning red. These are moments you can’t thank the person anymore because she saves you in a situation that other people wouldn’t even notice. And frankly, shouldn’t notice…

So in case you end up reading this Alek: Thank you for this little gesture of kindness! And by the way, the cream I was wearing that you asked me about is from Lancôme La vie est belle.